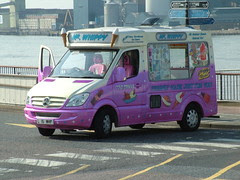 Mr Whippy (Photo credit: kenjonbro)
So yesterday I went to the park after work as I usually do, and got talking to the girl who works in the Mr. Whippy van who has nice eyes but I’ve got no idea about the legs, obviously, because she’s behind the counter and that’s part of her appeal. After that, I walked around for a while, licking my ice cream, thinking about what she had said to me—about how you need to get a good grip on the machine handle and hold the cone steady at the same time.
God, life is just full of these little tricks of the trade, full of things we have to juggle. It’s not enough to be good at just one thing any longer. It got me thinking about my own talent, and how I’ve been treating it as if it’s not enough. Like it’s just holding the cone steady and ignoring the handle. So I decided to start being proud of it. I decided to share it around.
Posted by Unknown at 14:31

Thanks for the linnk, Aliya, looking forward to reading this.

Loved the story, but still wondering how/ why John would take up mountaineering after that!

Yes, I think time of death must be a forever moving target depending on mind changes, changes of routine etc. I bet if he gave the same presentation the next day all the dates would be different.