I'm having the experience so many of you have had: publication in my home country. The Personal History of Rachel DuPree was released in the U.S.A. this week. It's a different experience than when it came out in the UK. There, it felt far removed and if the novel ended up in the discount bin, I never knew. Now it feels quite personal. Neighbors know that I've written a book and they're weighing in with their opinions. I'm lined up for readings in bookstores and am worrying that no one will show up. Should I hire actors to sit in the front row? I'm doing interviews (yikes!), and have the amazing luck of Barnes & Noble, a chain bookstore, selecting it as a Discover book.

It's a thrill but nerve racking, as many of you know. We'll see how it goes. It's in the hands of readers now, American readers. If they are half as gracious as the British readers, I'll be fortunate. We'll see what happens next.
Posted by Ann Weisgarber at 01:23 18 comments:

Everything's gone very quiet. Is everyone on holiday? Or sitting glued to their WIPs? One or two of us (we know who we are) keep going (Aliya manages it even though she's in the middle of moving house - quite a feat), but others seem to have vanished.

Anyway, just to liven things up a bit, I thought I'd share a couple of useful facts:
1. One in every 45 novels sold is by Dan Brown
2. The voice that tells you to "mind the gap!" on the underground belongs to the actor who plays David Archer in The Archers.

MNW-watchers will be familiar with L.C. Tyler's quirky detective duo Elsie and Ethelred, and delighted to learn that the latest instalment of their adventures, The Herring in the Library, is now out.  Len took time out to tell us about life as a full-time writer ahead of publication. 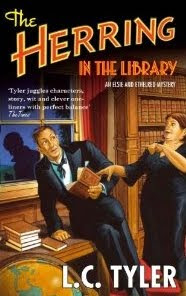 It would be churlish of me not to kick off by asking you tell us a bit about your new novel, The Herring in the Library.  You have the floor...


It's the third instalment of the Elsie and Ethelred series.  When Elsie is invited to accompany Ethelred to a dinner at plush Muntham Court, she accepts only so that she doesn’t miss an opportunity to sneer at Ethelred’s friends.  The other guests invited by Sir Robert Muntham (“Shagger” to his chums) are however remarkably ordinary – his lawyer, his doctor (and their respective spouses), a former banking colleague and a lady novelist who writes mainly about wronged women and who has an inexplicable but very strong dislike of Ethelred.  Elsie finds the evening dull until Sir Robert makes a brief speech to the guests and excuses himself for a moment.  Twenty minutes later he is found strangled in his locked study.  During that time, each of the guests has also been absent from the dining room.  Since there is no way that a killer could have made an exit from the study the police conclude that Sir Robert has killed himself.  A distraught Lady Muntham, however, asks Ethelred to conduct his own investigation and establish which of the guests was the murderer  (dot, dot, dot)


Since we last spoke on the MNW blog, you've made the big leap to being a Full-Time Writer.  What prompted that, and has it differed from your expectations?
I suppose I'd reached the point where I realised that if I was ever to be a full-time author (as opposed to an old age pensioner who just happened to write) I'd better get on with it and turn pro.  I had a contract for three books and the children had finished university.  Most sensible people were surprised when I did actually quit my job, but it would be a dull life if you never took a leap in the dark.  Strangely, full-time or part-time, a book still seems to take a year to produce.  If I still had a day job, however, I doubt that I would have made the trip over to the States or gone to so many conferences this year.


With four novels under your belt, by no stretch of the imagination are you a Macmillan New Writer these days.  What are the differences between being published by MNW and the mainstream Pan imprint?
Fortunately Will Atkins is still my editor and Mary Chamberlain my copy editor.  So in many respects it feels much the same.  With each book you become (hopefully) a little better known.  I notice it most at conferences, where a couple of years ago I would turn up and know nobody, whereas now I turn up and know more people than not.  You cease to go into shock when you discover a shop is stocking your books (though it's always a pleasant surprise).  You get more invitations to things - this was the first year, for example, that I was invited onto a panel at Harrogate.  You get more reviews.  What you don't lose is the insecurity that comes with the territory - you have no more idea than you did on day one whether what you are writing is actually any good.

Macmillan New Writing has been very successful in discovering and promoting crime novelists--Brian McGilloway and Ryan David Jahn have both joined you in going on to bigger things.  Why do you think crime pays?
Crime has always been popular.  In the 1930s a quarter of all novels published in the UK were detective fiction.  It still accounts for a large number of sales (21,000,000 books a year in the UK) and the biggest sellers - Colin Dexter, Ian Rankin, PD James, Stieg Larsson - are pretty much household names in a way that writers from other genres aren't necessarily.  I'm not sure that answers your question about why crime pays or why so many crime writers gravitated to MNW. But I agree that the MNW crime writers have done well - as you know, both Brian and Ryan were nominated for major prizes this summer.


Like many successful crime novelists, your range of influences is much wider than the crime genre (and of course your second novel A Very Persistent Illusion was not crime at all).  How did you end up writing crime fiction?  Which other crime novelists do you admire?
I tend to tell people that I didn't set out to write crime.  I hadn't realised until recently that that is a bit of a cliche (Ian Rankin didn't originally set out to be a crime writer either).  Having accidentally written a detective story, I discovered that crime writers, and readers, were really nice people.  So I thought I might as well hang around.  Which writers do I admire?  Always a slightly tricky one, that.  And likely to result in a fairly long list!  One recent discovery (and it shows how far behind I am in my reading) is RJ Ellory - beautiful, lyrical prose and a high body count.  If you want to try somebody who is currently a bit out of fashion, but who wrote very funny crime novels back in the 50s, try Colin Watson.


Your novels have attracted commercial success and critical acclaim on both sides of the Atlantic.  Are you suprised that your very British humour has been a hit in the US?
You are much too kind in your assessment, but thank you all the same!  My American publisher (Felony and Mayhem) specialises, amongst other things, in British crime fiction and has a very strong list.  I was interested to note that they didn't feel that it was necessary to change any of the text of either of the books that have so far been published in the US - though they added a hyphen to the title of one of them.  I think plenty of Americans like British humour, just as there is a big market for American humor over here (yes, spellings can be tricky).  "Cosy crime" (i.e. what I write) tends to feel a bit British, even when written by Americans - for example GM Malliet sets her books mainly in Cambridge.

This is your third Elsie and Ethelred mystery.  As a full-time professional, do you feel reassured that you've developed a recognisable brand, or pigeon-holed by publishers' understandable desire to have more of a good thing?
I've never had any problem with the brand thing.  Some people resent being treated as a commodity, but as long as it is a brand that is selling reasonably well, you can't complain.  I try to write in a consistent style from one book to another.  I think Macmillan have worked on creating a brand via Mark Thomas's covers and the "herring" logo that features on them.  Yes, it's reassuring rather than otherwise.
Many crime writers get to the stage where they can barely suppress the urge to kill off their star characters (which you amusingly deconstructed in The Herring Seller's Apprentice).  Are Elsie and Ethelred now sailing close to the wind?
Conan Doyle famously felt like that about Sherlock Holmes (but botched the job of killing him).  Many other writers have said that if they had known the series would go on so long, they would have made the main character very different.  I did have this idea that I might kill off my narrators at the end of each book and then bring them back again for the sequel in increasingly unlikely ways.

These days there are all kinds of widgets for writers to monitor their sales on Amazon.  Do you subscribe to this solitary vice, or do you affect a lofty disdain for sales?
I am totally a Novel Rank junkie, monitoring my sales via the internet.  It's interesting how an appearance at a conference, for example, can create a spike in sales - contrary to what you might imagine people would do after meeting me in person.

And of course the question all LC Tyler fans want answered (other than "How's Thistle these days?") - what are you working on at the moment, and when can we expect to see it on the shelves?

All LC Tyler fans?  You mean both of them?  Well, I'm currently working on The Herring on the Nile.  For the first time I am not just mirroring a Christie title but also (up to a point) a Christie plot - and jolly complicated it is too.  Elsie and Ethelred take a trip on the Nile, but Ethelred's work catches up with him when one of the passengers is shot ....   If all goes well, it should be out in summer 2011.

Len, thanks for your time.  Best of luck with the The Herring in the Library!
Posted by Tim Stretton at 15:36 12 comments: