News of a Blockbuster (but not mine) 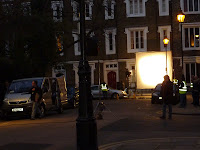 Filming is currently under way for the new (Columbia/Sony) version of The Girl with the Dragon Tattoo, and a small part of it has just been filmed right on our doorstep. A couple of months ago letters started to drop through our letterboxes saying that filming would take place in Lonsdale Square in late March. Last week notices went up suspending parking and then, yesterday, large white vans rolled into the square (and surrounding streets) bearing flood-lights, portable loos, catering and miles and miles of cable. Of course, round our way we are not the sort of people to go and gawp in the hope of catching a two second glimpse of Daniel Craig, but a surprising number of local residents decided to walk their dogs very slowly round the square while the film people were arriving and setting up.

As ever, I was impressed by just how many people are needed to make a motion picture – most of whom stand around a lot of the time looking cold and slightly bored. It can’t be efficient and I did wonder whether perhaps it wouldn’t be possible to train the electricians to be extras (or vice versa) or whether Daniel Craig couldn’t give the catering or make-up people a hand when he wasn’t needed on set. Filming began as night fell. Sadly we were not allowed to take pictures during the action, so I can’t provide you with a shot of anyone famous, though I got a good one of the door that Daniel Craig walks up to and rings the bell – a scene that we got to see many times, as re-take followed re-take far into the night. Those watching tried to remember which bit of The Girl with the Dragon Tattoo took place in Islington. The consensus was that the scene we were watching had originally been set in St Albans, but had been switched to London. It may be clearer when we see the finished product!

Today everything was being dismantled. A whole day’s work then for what will be a couple of minutes (or probably much less) of actual film. The general view of the local residents was that the whole thing had been rather fun, in spite of losing our parking for a day. The Sony/Columbia people were invariably polite and considerate, even when our dogs tried to get into a shot. For those who want to catch a fleeting glimpse of Lonsdale Square on film (and some other stuff set in Sweden) The Girl with the Dragon Tattoo is due for release in December.
Posted by Len Tyler at 11:08 5 comments:

I just wanted to take a minute to let folks know that another first novel, Pariah, has been published by Macmillan. I'm not quite certain whether it's been published by MNW or the main Macmillan imprint. I've corresponded some with its author, David Jackson, and he tells me he submitted to MNW, but according to Amazon, and to the copyright page of the galleys I got, it's simply a Macmillan book.

Either way, his book is out, it's a first novel, and it's a good one.

And a blog here.

Apologies for taking up space for the post I have jsut deleted - I managed to duplicate it from my own blog. It certainly wasn't worthy of a place on the MNW blog (and apologies also to Len, who's comment has been deleted with it!).
Posted by Frances Garrood at 16:05 2 comments:

Out today! "The Last Free City" on the Kindle!

Forgive the lazy cross-posting from my own blog, but publication day--even for an e-edition--is always worth trumpeting!
I'm delighted to announce that, after a series of delays and setbacks which would make a novel in themselves, The Last Free City is published today.  At the moment we have only the Kindle edition; the paperback will be along in a few weeks' time; its production is subject to considerably more bureaucracy. 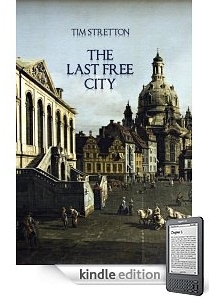 Click here to buy from Amazon.co.uk -- and don't forget that both The Dog of the North and Dragonchaser are also available for the Kindle.  One of the impressive features of the Kindle is the facility to download the first chapter as a free sample, and in a like spirit of generosity here is another sample - our introduction to the contentious teenager Malvazan, who will accompany the reader through much of the novel:

Malvazan had selected his outfit with care the previous night; scurrying around in the dawn gloom to find appropriate attire might suit Dravadan but such haphazardness was not the way to success.  He performed a brisk ablution in the ewer by his bed—fortunately he needed to shave only a couple of times a week—and ten minutes later made his way down the stairs into the dining room where the table was laid for an early breakfast.
To his surprise and contempt, his parents and brother were already at the table.
“Ah, the sluggard!” cried Dravadan, his dark fringe hanging into his eyes.  “The boy who lies abed till noon!”  He spread some honey on a slice of bread and conveyed it to his mouth with more enthusiasm than delicacy.  “You would think—”
“Dravadan!” said his mother Flinteska sharply.  “If you must bait your brother, at least do not speak with your mouth full.”
Dravadan rammed the rest of the slice into his mouth and, for the moment at least, devoted his full attention to subduing it.
Malvazan’s father Crostadan, head of House Umbinzia, raised his hands in a mollificatory gesture.  “Can we not have peace at the breakfast table on a day like today?” he asked.  “Malvazan, there is some minor amusement in such a habitually early riser being last among us.  It would do you no harm to display a little levity.”
Malvazan sat heavily as far from the rest of the family as the table allowed and reached for a slice of bread.  “I am glad to be such a source of amusement,” he said.  “It is good to know that a second son has some purpose.”
Dravadan let out a belch which escaped explicit reproof, accompanied by a smirk towards Malvazan.
Flinteska slapped her napkin down on the table.  “Enough, both of you.  Dravadan, as the eldest son you should show greater decorum; Malvazan, your invincible surliness oppresses us all.  Today we meet the King and Queen of Gammerling: a pleasant demeanour is required.”