Len Tyler has just secured his place in the premier league of authors by winning the Last Laugh award at Crimefest for The Herring in the Library. Heartfelt congratulations, Len! You deserve it.
Posted by David Jackson at 19:51 13 comments:

David Jackson's debut novel, Pariah, was published to great critical acclaim in March. Len Tyler caught up with him to ask him a few searching questions.

1 Your website already carries an interview asking most of the questions I wanted to ask! Maybe I could begin anyway by asking you a bit about yourself. What do you do when you're not writing?

I breed computer programs! That’s not a flippant answer, by the way. Like most debut authors, I’m a long way from the point at which my writing could support me financially, and so I also have a day job. I work as a university lecturer, which involves teaching and a lot of administration, but also research. In my research I create populations of software programs, I get them to breed, I tinker with their ‘genes’, and then I see what evolves. If that all sounds a bit science fiction/horror/downright freaky, don’t worry: none of my creations have yet escaped into the wild (he says, staring madly and rubbing his hands in glee as he commands Igor to pull the switch).

2 And you also write an excellent blog offering great advice for new authors (and old ones for that matter). How do you find the time to do it all? Are you a very disciplined writer, or are you just like the rest of us?

The day job (see above) takes up a lot of time, and then there’s the family of course – the helping out with homework, taxi service for the kids – plus all the chores that need doing around the house, and then there’s... But I’m not unique, right? We all have lives to lead, but if we’re serious about writing, we find the time. And if we can’t find the time, we make the time. Sometimes that has to mean making sacrifices elsewhere, like not watching that TV programme, or making do with an hour’s less sleep.

As for the blog: maybe it’s the teacher in me, but I wanted the blog to be about more than just random thoughts or self-promotion; I wanted to pass on some of what I’ve learned and experienced to others. Although I’m a new author, I have read and absorbed a lot about process, and I think there’s an audience out there for that kind of thing. I’m passionate about encouraging aspiring authors.

3 Like R J Ellory (and others), you live in the UK but set your books in the US. Why did you decide to do that?

They say ‘write what you know.’ Now this time my answer is slightly flippant because I actually hate that phrase. It’s far too confining. We’re writers. We have imaginations. We can go where we want do what we wish – at least on the page. I think that more useful advice is ‘write what you read.’ If you read only westerns, then you might find it difficult to write a successful teen vampire novel (or have they done vampire cowboys yet?) And what I read and enjoy most are US-based crime thrillers. That doesn’t mean, by the way, that I don’t like any UK authors – I like lots of them.

Why do I prefer the US novels? If you were to put me on the psychiatrist’s couch I’d say it probably has something to do with my childhood. To me at that time, the most exciting programmes and movies were the ones with the gunfights and the car chases and the explosions, and they all came out of Hollywood. I guess I’m still a big kid at heart.

4 Writers are always asked whether their books are autobiographical. In this case, I hope most of it isn't! Did you draw on any real-life experiences though? Or did you base any character on yourself?

Pariah borrows from the Hollywood of my youth, so it has all the violence and gunplay as mentioned earlier, but made much darker for today’s audience. I can’t tell you the number of people who have said what a great movie it would make. Where it draws more directly on my own experiences, however, is in the characterisation. By that, I don’t mean that the characters are based on people I know (I am definitely not Doyle!), but that they have all the flaws and foibles of real people. Doyle is certainly not superhuman, but neither is he absurdly encumbered by physical or mental problems. He is an ordinary guy with a wife and a child. He makes mistakes, he can be hurt (both physically and emotionally) and sometimes he does things for which he hates himself. But don’t we all? I try to give life to all the characters in my books – even the minor ones – but most of it is still made up. The exceptions are in snatches of conversation I may have heard elsewhere. Some of the dialogue in the Doyle household – especially with the daughter – has come straight from my own family.

5 You say you're working on a sequel. Would you see this becoming a series or do you have other plans?

I knew from the outset that I wanted Doyle to last for longer than one book, so yes there is a sequel. In fact it has been written and is currently with Will (for those who don’t know, Will Atkins is the editor for Len, myself and all the other Macmillan New Writers). I’m hoping to be able to reveal some exciting news about this very soon.

6 You've had some great reviews. Are there any comments on the book that you particularly treasure?

The best comment (which I didn’t even know about until Ryan Jahn tweeted me) has to be the one that was in the Guardian review, which likened my work to that of Harlan Coben but then went on to say that I was the better writer! To be so favourably compared to a luminary such as Coben is praise indeed. But, to be honest, the comments that touch me the most are the ones that come from ordinary readers – the ones who tell me that they read it in one sitting or had to stay up all night to finish it. After all, they’re the people for whom we write, and so it’s their opinions that count the most.

7 And finally, how would you sum up the experience of being published so far?

Weird, but in a nice way. It’s a life-changing event that is impossible to prepare for. And it’s not just the interviews and the fan-mail and the negotiating and the networking. Everyone I know seems to look at me in a different light now. Maybe they’re just wondering how I ended up with such a warped mind.
Posted by Len Tyler at 10:34 11 comments: 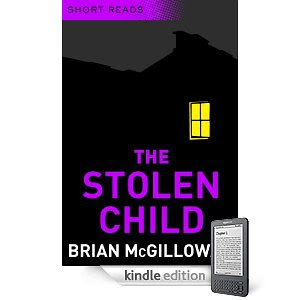 As part of the promotion of Little Girl Lost, which was released yesterday, Macmillan have produced a free e-version of The Stolen Child, a Devlin short story commissioned by Radio 4. The edition also includes the first two chapters of Little Girl Lost. You can get the Kindle edition at Amazon.co.uk.
Posted by Brian McGilloway at 21:03 4 comments:

Mac users and others who couldn't view the video previously posted

Try this: YouTube version of interview with Doug re: Thin Blue Smoke

By the way, this coincides with the U.S. release of the novel this month (finally).

Thank you all for your kind words.

Len Does it Again

A discussion of Thin Blue Smoke