If anyone is free and in London on August 7th I would love to see you at the launch for The Birds, The Bees and Other Secrets (6.30 - 8.30pm at Goldsboro Books). I hesitate to ask as I have so far been unable to get to anyone else's launch, living as I do in deepest Wiltshire, but it would be great to see anyone who might be able to make it.
Posted by Frances Garrood at 09:21 12 comments:

I've decided that from now on I'm going to lift the blog post about each month's new MNW release and copy it onto my own blog. I used to belong to an American cyber circuit for authors and each month every member would blog about that month's author and her book. It seems like a good thing to do.

Matt's interviews and the authors' responses are interesting and illuminating.

So I've pinched Tim Stretton's interview for this month's release. (What are your syndication fees like, Matt, and do you accept payment in alcohol--assuming we ever get to meet?) 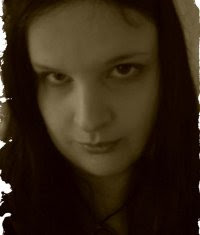 Nik Perring created a meme in which you have to take photos of some of your bookshelves and post them, so I thought I'd join in. Needless to say, I couldn't fit all my books into a handful of pics, so just consider this a taster!

Bookshelf - the aren't-I-clever-and-highbrow section. Oscar and Edgar are guarding their respective Complete Works, which you can't see because the blog layout cut them out of the picture.

Some more fiction (including my own copy of Cover the Mirrors, which is hiding in there somewhere!). On the second shelf nearest the camera, there's a pewter Gollum sitting in the boat with Bilbo Bagginses; an interpretation of the Riddles in the Dark chapter in The Hobbit. Gollum makes Tolkein's work for me - he's awesome.

I call this Heretic's Corner, but there's a variety of non-fiction stuff here, as you can see from the copies of Eats, Shoots and Leaves and Watching the English. You might also recognise the Flying Spaghetti Monster - I made Him out of wool. His pasta is French knitted and His meatballs are pompoms.

A small selection of my history non-fiction collection. The little guy in the hat is Victor the Victorian (from Deepings Dolls), the orange things in the top left are the feet of an Animal Muppet cuddly toy, and the dangly white thing is a sock monkey's tail.
Posted by Faye L. Booth at 15:39 3 comments:

As long as we're on the topic of the back flap, has anyone noticed that MNW has stopped putting author photos with the bio? The Personal History of Rachel DuPree, The Sleepwalker's Introduction to Flight, and The Dog of the North are all sans pictures.

Brian's Gallows Lane seems to be the last published with an author photo, but I don't think we can attribute this policy change to Brian's mug shot--it's the same one they used for Borderlands.

Now, writers aren't generally a photogenic lot, and I can well imagine that keeping our images off the product might improve sales. But if this is the case, why wasn't it thought of earlier, so we could all have benefitted from those expanded sales?

In any case, this opens up the possibilities in the bionotes. We can now claim different racial backgrounds, or can add lines such as, "He lives above the fire station in Tooting Bec, and makes his living as a male fashion model," or "She came to writing after a successful career in women's boxing, with 15 TKOs on her record."
Posted by David Isaak at 19:44 11 comments:

Things you should or shouldn’t put on your author bio

“M.F.W. Curran was born in Essex, in 1974. From an early age he was brought up on a diet of fantasy and science-fiction and has been writing stories since he was ten years old. In a past life he worked in the banking industry, for the Government, as a music journalist, and a lyric-writer. The Secret War is his first novel. He lives in Sheffield with his wife, Sarah.”

Now, after The Secret War was published someone “mean” remarked on Grumpy Old Bookman’s blog that my bio was unbelievable and that if I’d done all those things then it made their life look positively dull. Well, I have done all these things, but it’s not as grand as it sounds (well, not to me anyway) and in retrospect putting a faux resume on an author bio might have been fun at the beginning, but now it’s quite tired and I’m looking to change it, maybe not in time for the hardback release of The Horde of Mhorrer in January 2009, but maybe – and let me add, hopefully – when my third book is published. I certainly will post a new author bio on my website this year.

If I'd known that my lame comment, posted below, was going to stay at the top of the heap for so long, I wouldn't have posted it. Anybody got anything less boring to say?

As nice as you Brits have been, what with publishing my first novel and all, I kind of feel like I should apologize for all that independence stuff we stirred up 232 years ago. Nothing personal. Really.
drw
Posted by Doug Worgul at 04:41 3 comments: