In one of my favourite books, The Book of Dreams by Jack Vance, the cornerstone of the plot is a picture of the guests at a banquet. Who are they, and what happened to them? You'll need to read the book to find out, but a poisoned delicacy known as charnay is on the menu... 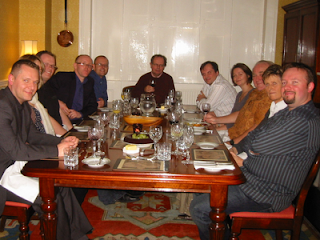 I was put in mind of that iconic--to me, at least--image by this picture Len Tyler sent me. It's of the gathering of MNW writers and friends Len and his wife Ann hosted in London on Friday to mark David Isaak's visit to London. The parallels with the Vance book are inexact: charnay was not served, but I can never see a group photo like this without thinking of The Book of Dreams. The guests in Vance's picture are unidentified, so I will leave it to the reader to work out who is who here... As well as MNW writers we have an editor (THE editor, in fact), a bookseller and, all being well, a future Macmillan New Writer.

It was marvellous to meet so many of the other members of this blog. What was strangest was that it didn't feel like meeting new people at all. With those whose blogs I keep up with the most, like David, Matt and Aliya, it was like resuming a conversation broken off the same day.

One of the most impressive things about the group was the complete absence of ego. Anyone published by MNW has, by definition, achieved a level of success most aspiring writers can only dream of; but this is a group of people whose focus is on the craft of writing, not on the trappings of being published. And everyone genuinely seemed to enjoy the success of everyone else on the list--and indeed to have read each others' books. I suspect, though, that no-one has read quite as many as David Isaak, who has not only read every MNW title ever published but, it seems, every title ever published, full stop!

One of Len's guests last night was David Headley, the proprietor of the exceptional Goldsboro Books in London. David is a great supporter of MNW titles and it was good to see him again. If you want to buy any MNW book--or other signed first editions--why not get it from here rather than Amazon or your local High Street chain?

It was a great to meet so many people I had previously only known virtually, and it was a splendid evening. Thanks again to Len and and Ann for making it possible!
Posted by Tim Stretton at 10:16 12 comments:

October and November publications and a look ahead

Due to a severe lack of time on my part, the two most recent additions to the Macmillan New Writing library have not been posted on this blog until now (I don’t have interviews to accompany Dogfellow’s Ghost or The Opposite Bastard, but the two novels below are a fine example of the wide range of publications that Macmillan New Writing delivers), so my apologies to you all.

Next month it’s the turn of Michael Edwards' comedy, Wild Oats, and then the new year will bring books by Doug Worgul (February) Len Tyler (March) Faye Booth’s Trades of the Flesh (August) and my little opus in January, not to mention paperback editions of Light Reading, The Herring Seller’s Apprentice, The Dog of the North, Testament, Sleepwalkers Guide to Flight, The Secret War, Gallows Lane, Restitution and a host of others (again, my apologies if I've missed anyone out!).

But on a more administrative subject, my tenure as blog administrator will soon be over. I guess what I’m saying is that after my second book is published by MNW in 2009 I will no longer be a Macmillan New Writer – just a Macmillan Writer.
This isn’t “goodbye, and thanks for all the fish”; I’ll still be part of this community (in my opinion one of the best writing communities for published authors out there) and I’ll still contribute to this blog, but come summer next year – what with everything else going on in my life - I’ll be looking to hand over the admin duties of “Macmillan New Writers Blog” to one of the other members.
So, how about it? Any volunteers? David is the other co-admin bod for the blog, and there needs to be two. Does anyone here have the blog know-how and the inclination to take this on?
Posted by mattfwcurran.com Web Admin at 12:26 7 comments:

"A very modern tale of reality TV, unexpected love, and the Prince of Denmark
Forced to take employment as live-in carer for a genius quadriplegic undergraduate, failed actor Timothy Salt is not optimistic. His charge, Michael Owen, is only at Oxford to please his devoted mum. When ersatz aristo Phillip Sydney offers the leading role in his student production of Hamlet to Michael, Timothy’s humiliation seems complete. Meanwhile, fellow student thespian Anna Jenkins, deciding that Phillip is the ‘perfect gentleman’ who Mummy so wants her to find, accepts the part of Ophelia.
Then TV producer Nikki Hardbody (Kids with Cancer and Pepé: The Boy with No Nose) arrives to immortalise Michael in her latest documentary, and Timothy realizes that the only way he can salvage any self-respect is by sabotaging the production of Hamlet. Michael, meanwhile, is horrified to find himself falling for Anna. As rehearsals progress, Anna discovers that her perfect partner isn’t Phillip Sydney after all. No one is more delighted than cynical Nikki Hardbody.
The Opposite Bastard is a dark comedy of manners. An uproarious and moving commentary on love, disability, dignity, political correctness and media opportunism, it is a strikingly original and provocative debut. "
About the author:
Simon Packham read drama at Manchester University. After a short spell as one half of the comedy duo The Amazing Spendinis, he trained as an actor, and has since appeared in a variety of West End shows. Those of a less than vigilant disposition may have failed to spot him as Mr Quaddy in episode 1164 of The Bill.
For more information please visit the Macmillan New Writing site.
Posted by mattfwcurran.com Web Admin at 12:22 2 comments:

"A shocking and beautiful reminder of humanity's animal nature

A new century has begun and new fields of science are shaking man’s longest-held beliefs. And on a tropical island, somewhere in the Pacific, new kinds of creature have been conceived.
Yet the Master who made them has disappeared, and for one of his creations the loss is unbearable: neither entirely man nor wholly animal, DogFellow is both more and less than the sum of his parts. Pitifully conflicted, his loyalty to a lost creator is at war with other, more human desires. And DogFellow alone can unlock the secrets of a strange and terrible past . . .
Gripping and poignant, philosophical and fantastic, DogFellow’s Ghost is a timely allegory on freedom, slavery and the wildness of the human spirit. "

About the author:
Gavin Smith has worked in further education and taught for the Open University. He lives in Exeter.

Can I Buy You a Drink?

I'm passing through London once again, for a meeting on November 27th.

I'll be around on the 26th (though probably worse for wear, having just arrived that morning). At the moment, I have Friday the 28th free. If you're around and available, I'd be happy to knock back a glass of something with y'all.
Posted by David Isaak at 21:00 22 comments: