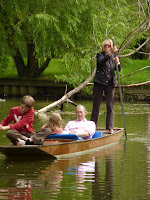 Partly in the interests of recording all great literary events and partly because nobody seems to be posting anything at present, here is a picture of Eliza punting. Eliza and I and our respective families (though, after a certain amount of debate, not dogs) gathered in Oxford with the aim of punting upstream to the Vickie Arms for lunch. A clear plan and a good one but, in some sort of twisted allegory of the whole writing process, we had to revise our plot several times and the finished article looked a little different from the original intention. We arrived at the Cherwell Boathouse in the middle of a heavy rainstorm. The only punt on the river was occupied by a group of Japanese tourists, each carrying their own small umbrella. My assertion that "all weather is good for punting" was quickly dismissed, and we retired to the Ashmolean Musuem for a bit of Culture. The rain having cleared around lunchtime, and one lost writer having been located, we set out again. The original epic punt to the Vicky Arms was replaced with a novella of a trip downstream to the Parks (is this analogy really working? no, probably not). Anyway, we punted about for a bit, stopped for a Pimms under the shade of an overhanging bough, then dashed back home to check what the dogs had been up to in our absence. I think an annual punting trip could become an MNW tradition?
Posted by Len Tyler at 10:11 7 comments: