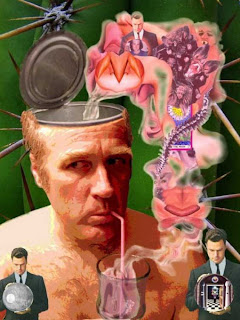 I'm fumbling my way forward through a new novel, and so far it has the brilliant title "Untitled." It carries the ring of familiarity, but it's not terribly original.

I seldom come up with titles until I'm well-underway (say, one-third or more through the book). And even then I often change them before I've completed the manuscript. (As experience with Shock and Awe shows, they can also change in the very last stages of publication.) So titles to me are a rather fluid thing...yet I don't really feel I have a handle on the book until I think I have a title.

I know that a few MNW titles apart from my own have undergone at least slight changes late in the process: if I recall, Suroopa Mukherjee's Across the Mystic Shore was The Mystic Circle, and Peter Anthony's A Town Called Immaculate was once merely Immaculate.

Matt Curran is the only other writer I've seen blog on the problem of searching for titles. (Like me, he's often scratching his head over possible titles at fairly late stages. It makes me happy to realize someone else shares my problem.)

Now, I can imagine some books have their titles before they begin. Brian McGilloway's Borderlands certainly has offered itself a possible title by the end of the first page, and Aliya Whiteley's Three Things About Me is in the same category (if you don't count the prologue). But I have no idea if Brian or Aliya had those titles from the outset, or after the first page, or only after completing them, or only after changing a previous title in consultation with the publisher.

As to Cover the Mirrors and The Herring Seller's Appprentice--both great titles--they surely relate to the content of the books, but I have no idea at what stage they might have been titled. And when we get into more metaphorical relationships between book and title--for example Playing with the Moon or Never Admit to Beige--I can't even conjecture on when or how the title might have been selected.

So, do you have a title in mind when you start? Do you need a title before you can start? Do you often change it as you write? Did you end up changing it after the manuscript had been taken up for publication? Can I end a sentence here without a question mark?
Posted by David Isaak at 22:53

Happy New Year to one and all! Haven't responded to the posts for sometime as I have been weaving in and out of Delhi and Bhopal as part of my field work. Its exhilarating time, but far removed from fiction writing. I would love to share my experiences with all of you especially in the context of what M. Fuch had written about post-publication blues. Doing both - non-fiction and fiction jointly - makes self definition as a published author very different. I would love to post something on why I feel writing non-fiction gives you a balanced sense of what you have achieved. Clearly I would need to bring in something different from MNW (though Palgrave Macmillan is part of the family tree)so it would help to know whether I can use this blog to write about other writing???

Lovely post on titles, David! Set me thinking. Titles on the cover can attract you to a book, so I guess it is part of the marketing process. But for a writer the most definitive moment is when the title swims into view. It happens in my case when I am well into the novel. While I agreed with Mike about the reasons for changing the title of Mystic...I rejected all the alternate titles sent to me and chose my own! I remember it came to me almost like a moment of inspiration. I am rather possessive about titles!

Actually, Three Things About Me was always called The Big Fib, right up until I finished it and I gave it to the brave souls who always read my books first for me. Allcombe was called Fibblecombe back then.

I'm glad I had a change of heart about it.

Generally speaking, I find that titles come to me instinctively: they just seem to surface from some place in my subconscious. Cover the Mirrors acquired its title a couple of chapters into the first draft, and my second novel had its title before I even started researching it (it came to me while I was finishing CTM).

My work-in-progress took ages to name, and I'm sure it made the whole project harder somehow. Titles help to give me a sense of the book, in a weird way. Anyway, I finally happened upon a line in a Percy Shelley poem and nicked that, and I think it suits the book very well.

So far, none of my titles have been changed, by me or anyone else. Of course, every time I say that, it seems to be the universe's cue to prove me wrong...

I don't think I could start writing without at least some idea of a title in mind. It's a shorthand I use in my head to invoke all the aspects of the novel when I'm thinking about it.

"The Dog of the North" was always called that, although for two-thirds of the writing process it was a holding title until I came up with something better...which I never did. I can't now imagine the book with any other title.

My current work in progress (if that's not too grandiose a title for some scribbled handwritten notes) has at least two potential titles. One of them is nearly perfect (but the 'nearly' may be below the waterline); the other is pleasant and memorable, but uninspiring. A third potential title is wonderfully euphonious, but unless the plot develops in an unexpected way, too peripheral to the main thrust of the story.

Titles aren’t usually a problem for me, apart from the two books being published by Macmillan New Writing, oddly. The Secret War was originally called “The Plainsmen”, which sounded too much like a western, while The Horde of Mhorrer has been a bloody nightmare to think up a title for, with several names jockeying for position. In the end it was Will who suggested I reverted to The Horde of Mhorrer, the original working title for the book.

Thankfully the monikers for the next two in the series, The Traitor of Light and The Fortress of Black Glass were “lightening bolt” titles, and I doubt they’ll change. Likewise with my current book, The Black Hours which was a title that stuck from the beginning like four-week old cornflakes clinging to a ceramic breakfast bowl.

I think some books marry with titles naturally, while others end up in the divorce-courts every other month.

Hi David and Happy New Year to everyone!

A great post and one that seems to have struck a chord. Borderlands got its title after it was written from my good wife. It was just Untitled until then. Gallows Lane had the title before the plot - it's the name of a street over here, seemed too good to waste, though I had initially thought of A Walk on Gallows Lane, though it seemed too Lawerence Block-ish (not that that's a bad thing!). Book 3 is currently called Bleed A River Deep, after an Ed Harcourt song which I love, and because it seems to fit most of the plot strands. I'm plotting book 4 at the moment and want the title to have something to do with Rising (The Rising is the title I'm working under presently, but I suspect that may change.) Ulitmately, the title is your way of setting out your stall - it's just sometimes people see you selling something different from what you'd thought you were selling. That was certainly the case with Borderlands and I'm delighted with my wife's decision on it - particularly as she hadn't even read the book at that stage, but had listened to me blethering on about it for so long.

I can't write a book without a title. It's as if even i don't know what it's about unless it has a name. Testament was 'Toby' all the way through its long gestation period but Will said, and I had to agree, that though it was very apt when you'd read the book, nobody would pick up a book called Toby, it just doesn't signal anything.

But getting from Toby to Testament was hard and much head-scratching, friend-buttonholing and emailing back and forth to Will ensued. Favourite for a while was The Masater Mason's Son, while i favoured Steadfast Like the Crane but that, again, only made sense once you'd read it. Testament was Will's idea and I think it really does the book justice. The work in progress is called Rebecca Revisited. I don't suppose it'll survive because it's too du Maurier-esque but it makes sense to me during the writing process.

Thanks, all--fascinating stuff. Having read Borderlands, it's hard to imagine it might have ever had another title! (My hat's off to Brian's wife.)

Suroopa--post whatever you please! It's your site as much as anyone's. (Plus all that sounds interesting.)

Playing with the Moon is a reference to the song that one of the characters sings--a blues song that has a line something like, 'Do you want the moon to play with?'

I liked it so much I knew it had to be the title!