My love affair with historical fiction

Thanks Aliya for kicking off this round robin. Before I hand over to the next Macmillan New Writer with my questions, Aliya asked me how I came to write historical fiction.

Beore I came to write The Lady's Slipper, most of my writing was contemporary. I read a lot of contemporary fiction as well as historical fiction. A few years ago I would have been surprised to find I had produced a historical novel. So why write one? 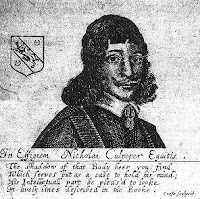 The answer is that it wasn't a case of me deciding on a period and then setting the novel there, it was more that my characters demanded certain conditions to flourish and tell their story. I started with a character who wanted to paint an orchid - I had seen the rare lady's-slipper orchid myself and wanted to write (initially) a poem about it. This desire was subverted into my character's desire to capture it in paint. From then on the character grew and developed. I thought for the flower to have impact I needed a time when ideas about botany and images of flowers were new and fresh. Perhaps a time before mass printing, a time when herbs and flowers were used for healing. This led me to the 17th century when herbalists such as Nicolas Culpeper were just making their mark on history and the science of botany was in its infancy.

The idea of the medicinal use of the lady's-slipper then sparked the character of Margaret the herbalist, whose views on "the web of the world" were a very different religion from the conformist view of the time. I am interested in the different ways that faiths have shaped the world and this tied in nicely with the burgeoning Quaker movement, viewed in the 17th century as radical and dangerous. I couldn't resist having a Quaker character, so Richard Wheeler was born. In addition, the Quaker movement started close to my home in Westmorland, and visits to the still surviving historical sites fascinated me.

I was also keen to exploit the enmity between two men, and needed an atmosphere of unease where people felt unsafe so that the developing plot would be credible. The English Civil War where the King had been beheaded by his own people supplied the background disturbance I needed.

My second book, The Gilded Lily (on the editors desk) is set in the same period through necessity as it features Ella, one of the characters from The Lady's Slipper. It is a very different book as it is set in restoration London, a choice made so that I could exploit the desire for wealth and luxury which is a part of Ella's character. I will have to apologise to readers though, as the book features the Thames frozen over, which in fact happened in 1662 and not in 1661 as my book would suggest. This is because I didn't know I was going to write The Gilded Lily when I began The Lady's Slipper and unfortunately I cannot bend history - only apologise when I have had to do so.

The one I am working on now will be set in a different period. As with the first two I am looking for a time and place where my characters and ideas will collide in the most satisfying way. At the moment that seems to be turn of the 16th century in Spain. I can't tell you much more about it because I want to keep the excitement about it inside and not let it dissipate until I have a first draft in front of me.

Now though, I find I enjoy the researching period such a lot, and the wonderful excuse it gives me to hang around museums, historic houses, art galleries and libraries. And I have discovered some fantastic writers in the historical fiction genre, who have given me further insights into our rich heritage. So I cannot imagine that I will run out of ideas from the wealth of our history, and I guess that will keep me writing historical fiction for a while yet!

Aliya asked how I communicate my passion for the period to the reader, but I've really no idea. I just loved writing about the seventeenth century, and my revelling in it I hope will somehow be transmitted, maybe through the language of my characters.

Thanks Aliya for your questions.
Deborah

Now - over to M.F.W. Curran, author of The Secret War and The Hoard of Mhorrer - 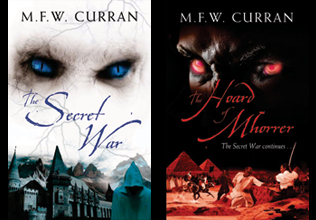 On his website Matt says that as a child he had "a diet of fantasy and science-fiction from parents who might have known better but loved to encourage their son's imagination."
So I would like to ask Matt, what were your favourite childhood books and can you trace their influences in your novels?  And I'm interested to know what particular things your imagination feeds on now, as I take it your parents are not still taking you to the library! Perhaps you could talk a little of your influences past and present.

Also your books are not easy to categorize, so I would like to ask what sort of things do you think your readers would enjoy when they've finished your books?

Looking forward to hearing your responses, over to you.....
Posted by Deborah Swift at 13:30

A really interesting reply, Dee, and an eye-opener for me. I always thought that historical novelists were born historical novelists; I'd no idea it could just happen, as it did to you. I love the idea of the flower titles, too, and envy you having material for a sequel (or the opportunity to write again about one of your original characters). That must be so satisfying, as it's hard letting go of characters one has written about (and lived with) for all those months of writing. Very good luck with the next one.

I love that you came to period writing because of the story, not because of the period. I think that's wonderful, and, as a future reader of your book, it assures me that it will be a good story and not just a scenic tour of a historical time and place with a few interesting characters and plot points thrown in.

Thanks for your comments everyone, I'm looking forward to the next round.

Great reply to Aliya's questions. Sets the bar high already. I'll come up with a response over the weekend (already have a question to pose for Tim!).

Hello everyone, thanks for your comments, I'm looking forward to Matt's reply.And good news, just heard that PanMac will be publishing my new one "The Gilded Lily" and also (through the bookseller.com) Terence's new one "The Last Plantagenet". Congratulations to Terence, if he's reading.

This is great news, Dee! I really enjoyed The Lady's Slipper and am looking forward to the new one. Do you have a publication date yet?

Fantastic news, Dee, and to Terence too...!

Have posted my response to your questions... so now I pass the baton on to Tim!