Our Featured Publication: Acts of Violence

Our featured publication in November is a debut novel by Ryan David Jahn, Acts of Violence. 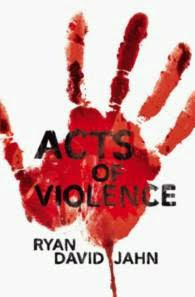 Katrina Marino is about to become America’s most infamous murder victim.

This is Katrina’s story, and the story of her killer.

It is also the story of Katrina’s neighbours, those who witnessed her murder and did nothing: the terrified Vietnam draftee; the woman who thinks she’s killed a child, and her husband who will risk everything for the truth; the former soldier planning suicide and the man who saves him. And others whose lives are touched by the crime: the elderly teacher whose past is catching up with him; the amateur blackmailer who’s about to find out just what sort of people he’s been threatening; the corrupt cop who believes he is God’s ‘red right hand’.
Shocking and compassionate, angry and gripping, ACTS OF VIOLENCE is a sprawling, cinematic tour-de-force, a terrifying crime novel unlike any other.

Hi, Ryan. Tell us a little about your novel, Acts of Violence.

It's a crime novel set in 1964 and the story is very loosely based on a real event. A woman in Queens, New York, was murdered outside her apartment by a man whose only motive was to kill someone, as he later testified. He attacked her twice, and the combined attacks lasted over thirty-five minutes. There were allegedly thirty-eight witnesses who did nothing to help her. I thought it might be interesting to take the heart of the story and build a novel around it. It spans a three hour period on the morning of the attack, and dives into several subplots which move likes spokes around that central hub.

What was your path to Macmillan New Writing?

I wrote the first draft of Acts of Violence in July and August, 2008, and spent the next several months rewriting it and doing research on the state of the publishing industry (abysmal). In November I read about Macmillan New Writing on an industry blog. After doing some research, I thought they seemed a viable option. And I liked the fact that you could simply submit your completed manuscript, bypassing the whole business of figuring out how best to pitch it to agents. (I'd gone that route with earlier work, which rightly remains unpublished, and disliked the entire process.) On December 8, I emailed the manuscript in to MNW. On December 20, Will Atkins (commissioning editor) emailed me that he liked it, but others would have to read it before any decisions were made. They'd get back to me after the Christmas holiday. On January 8 they did. It was a nice way to start the new year.

You’re in a somewhat-unique position here, as you have a multiple-book deal with Pan Macmillan even before your first novel hit the stores. How did this come about?

I can only assume the decision was made during an office party at Macmillan and everybody was drunk. After the contract came through for Acts of Violence, I went back to work on a second novel I'd begun in October. I had this irrational fear that if I couldn't get it finished before the first book came out, something horrible would happen. I didn't know what, but that vague fear hung over me, threatening that something wretched would fall upon me if I didn't type “the end” soon enough. I finished Low Life mid-May and submitted it. At the end of June, Will emailed me and said he'd like to talk on the phone. If I couldn't talk today, it would have to wait a week, as he was heading out of town. I emailed him back and asked him to call. I expected a nice rejection and an open door. (Though my wife, smarter than me, assured me that nobody ever chooses to break bad news on the phone rather than in email.) Ten minutes later the phone rang. We chatted and I rambled a bit about what I was working on next. He made an offer for Low Life and the follow-up, and we spent the next couple weeks banging out the details for a two-book deal. I sent in my notes on the copyedited typescript last night.

I don't really have one. I do try to get two or three hours of writing or rewriting in every day, but I could start at seven a.m., or, as last night, eleven p.m. My preference is to work nights, as there are fewer distractions then, and I'm easily distracted, but I wake early no matter what I've done the night before, and lack of sleep makes me cranky.

Do you have a writing mantra?

Keyboard. If I'm writing longhand I find myself frustrated, as my hand won't move as fast as my mind. I learned to type on a manual typewriter almost twenty years ago, using my index fingers for the letters and my right thumb for the space bar. I still type that way, but on computer now, and last time I checked I managed about 65 words per minute. The only downside to having learned to two-finger type on a manual is that I still pound at the keys as if my fingers were hammers and have destroyed a few keyboards.

I'd like to say Carver, Hammett, and Hemingway, and it's true that they were later influences, but the greatest influences tend to be the earliest, I think, and for me that would be Stephen King, Walter Dean Myers, and Kurt Vonnegut. Those are the guys I was reading when I first got serious about writing, so those are the guys I spent time imitating.

2.I once jumped off a two-storey roof trailing a bed sheet which I thought would act as a parachute. It didn't.

3.My grandfather self-published his own seventeen-years-in-the-making retranslation of the Bible. The only languages he knew, though, were English and Russian, so I'm not sure exactly how he managed it.

4.I've never been to Spain.

And, the last question: What would you rank as the most ludicrous moment in your life?

I spent some time in the army. The whole experience was ludicrous. But out of that collage of absurdity something does stand out. During the last week of basic training, someone failed to fill their canteen before PT (physical training), so the entire company had to hold their filled canteens in front of them, pinched between their two index fingers (no gripping allowed), while one of the drill sergeant yelled, “Now turn left! You're driving a car and you gotta turn left! Don't drop your steering wheel or you might crash! Beep beep!” Everyone turned left. “Now turn right! Beep beep!”


The formal publication date of Acts of Violence is November 11, but the book is not only available for preorder, but has actually already been shipped by many online sellers. Join me in wishing Ryan the best of luck with this book--and the next two.
Posted by David Isaak at 06:46

Ryan, I think we're all hoping that, as none of us has been the first MNWer to make it on to the best seller list, you will! From early indications and the things you say about Acts of Violence, I'd say there's every chance that the book's going to do really well. I'm really looking forward to reading it.
Here's to success!

Many congratulations, Ryan, and all the very best for Acts of Violence and its sequels (are they sequels?). You've done incredibly well, and I'm sure we're all proud of you!

Looking forward to reading this - it sounds a great premise for a book. And congrats on your deal, hope they all go on to be bestsellers.

Thanks, everyone. And thanks, David, for putting this up.

It's pretty interesting times. My fingers are crossed that it does all right.

Ryan, I've really being looking forward to this one.

Fingers crossed that this one will unite critical and commercial success!

(I'm not a big fan of phones either.)

Congratulations on publication and on the great reviews you've had so far.

Loved the ludicrous moment too...!

Please correct me, but is this the first MNW author who has served in the army?

Congratulations, Ryan! I'm impressed that the Kitty Genovese case inspired you to write ACTS OF VIOLENCE. I worked on the Crime Stoppers tips line for 13 years, which provides an avenue for people to call anonymously with information they have concerning unsolved crimes and the location of wanted persons. The police prefer, of course, that during the commission of the crime that any witnesses would call 911, but for "after the fact" information obtained, Crime Stoppers works nicely -- no Caller ID.
Best wishes!

Ryan, many congratulations. 2009-10 will be your year. Enjoy every minute as you watch the sales soar, and have fun in London celebrating the release. It doesn't get much better.

Congrats Ryan - it's an incredibly compelling book and deserves every success.

Again, thanks everyone for the congratulations.

Frances, they're all three standalone novels. I tend to break my characters on the first go-round.

Brian, thanks for reading it!