What would you sacrifice to carve your name in history?
When Damia Miller is employed to promote revered Kinnerton and Dacre college, it doesn’t take her long to recognise that a grotesque antique painting recently uncovered on one of the college’s walls might hold the key to the college’s future.
Six hundred years earlier, master mason Simon of Kinnerton is preparing plans for his magnum opus, a college to rival anything in England. His work only interrupted when he becomes father to the son he has longed for for twenty years.
In the present day, Damia grows increasingly obsessed with the mysterious wall-painting and the college’s dark history. What is the painting trying to tell her? Why was the college named after its mason as well as its founder? And who does the statue of the carefree boy in the Toby Yard represent?
In mediaeval Salster, Simon of Kinnerton is struggling to come to terms with the fact that his son is disabled – cursed, in the eyes of many of Salster’s townspeople. But just as Simon himself is coming to accept young Toby a tragedy occurs whose repercussions will echo until the present day.
Testament is a startling feat of imaginative skill, distinguished by the breadth of its vision, and by the heartbreaking story at its centre: that of the sacrifice a child made for his father, six hundred years ago.
About the author: 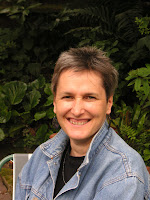 After an idyllic farming childhood in West Wales, Alis underwent several culture shocks in rapid succession. She swapped a 60s comprehensive in the sticks for a sixteenth century Oxford college where she ate the lotus and read a bit of Eng Lit for three years; she then ‘graduated’ to a fast food restaurant where she worked for a year and was re-educated before becoming a London commuter whilst she trained as a speech and language therapist at City University.
Now, nearly two decades on, she still practices as a therapist some of the time. The rest of the time she writes at the home in Kent which she shares with her teenage sons - who resolutely fail to be dazzled by her industry at the keyboard - and her partner who is, gratifyingly, much more easily impressed.
She has, mostly, got over the culture shock.

Yes, I too dearly love those "I'd write a book if only I could find the time" comments.

The only possible solution is to find out what your conversational partner does, and suggest that you might do some of that yourself:

"Oh, you're a surgeon? I've thought I'd like to do a little surgery, if only I could find a little time."

Oh, you're a [structural engineer/investment banker/ Professor of East Asian Languages/ policeman/ professional acrobat]? I'd love to do a little of that...

I was interested in your comments on running and walking. I do both (although the running is increasingly spasmodic). Like you, I find walking is great writing tool: it soothes the kinks from the mind, creates thinking space, gets the brain into rhythm. Running, on the other hand, is useless for any writing purpose: the goal is simply survival.

Yet I've never seen a "how to write" book extol the virtues of walking. Maybe there's a niche market here -- "100 Great Writers Walks in England"...

Hi David - I wouldn't have the nerve, but wouldn't it be great if I did! Maybe just thinking it will be enough to cope with those comments in future - the irritating ones will wonder why a sneaky little smile has begun to play around my lips...

(The three of us should probably exchange mobile numbers actually, in case one of us - almost certainly me - gets lost.)