THE GILDED LILY by Deborah Swift 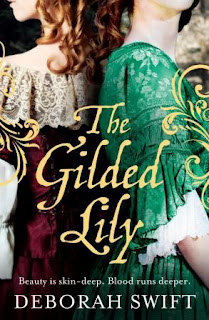 'Deborah Swift's THE GILDED LILY is a heart-rending story of two sisters on the run, searching for a better life. Beautifully written and meticulously researched, the novel drew me straight into the teeming streets of Restoration London. An addictive, page-turning read.' Mary Sharratt

Winter 1660
Sadie Appleby has lived all her life in her small village. One night she is rudely awoken by her older and bolder sister, Ella, who has robbed her employer and is on the run. The girls flee their rural home of Westmorland to head for London, hoping to lose themselves in the teeming city. But the dead man's relatives are in hot pursuit, and soon a game of cat and mouse begins.

Set in London's atmospheric coffee houses, the rich mansions of Whitehall, and the pawnshops, slums and rookeries hidden from rich men's view, The Gilded Lily is about beauty and desire, about the stories we tell ourselves, and about how sisterhood can be both a burden and a saving grace.


Deborah, thanks so much for answering a few questions about your second novel, The Gilded Lily, published by Pan Macmillan. It takes place during the winter of 1660-61 so let’s begin with the time period. What are the challenges of stepping away from the year 2012 and assuming the points of view of your main characters?

One of the main challenges was to find convincing voices for the two sisters, Ella and Sadie, and to make them distinct from each other. Girls in their position had little education and could not read, and as much of it was written from their point of view, I had to avoid using too many long words or anything too literary. Their view of the world was very narrow, and founded on hearsay, gossip and superstition. Stories were a very important part of a village culture where hardly anyone could read, and the telling of stories - both fairytales and lies became a major theme in the novel.

The girls' small horizons became an advantage when they had to come to terms with the explosion of new sights and ideas when they reached the city of London. When writing, I also wanted to give a sense of a Westmorland accent so I listened to a lot of archive material of Cumbrian dialect. Unfortunately a lot of it was almost unintelligible to our modern ears so I had to pick out only odd words to give a flavour.

Your first novel, The Lady's Slipper, also begins in 1660. What draws you to that decade?

The period was one of tumultuous change, but also of optimism. The end of Puritan rule meant a swing back to a world of lavish entertainment and sexual freedom and a revival of fashion and the arts. It was the Swinging Sixties in London three centuries before the 1960's. Although The Gilded Lily deals with the dark and seamy London underworld, there is a sense that anyone can become anything - a poor girl can become a King's Mistress as indeed Nell Gwyn did. And as a writer, although The Gilded Lily might at times be chilling, in the end the tone of my books tends to the optimistic, rather than pessimistic.

Were there interesting or surprising things that you discovered during the research process for The Gilded Lily?

I was just amazed by how cold it was in the Little Ice Age. The Thames froze to a depth of nine feet! Birds froze mid-flight. But Londoners made a holiday of it, put up stalls on the frozen river, tied runners on their boats, and were determined to enjoy it. On one occasion the King paraded his horse guards up and down on the ice highway, which was known as Freezeland Street. During this time of freezing weather the King decided to raise revenue by imposing a Hearth Tax, and tax the household per chimney. If he was standing for election today that would not have been a popular move!

Admirers of your work praise you for your attention to detail. I agree, but I also find your dialogue equally compelling. What are the challenges of writing 1660's vocabulary and phrasing?

It is difficult to know what their voices sounded like as we have no recordings. Dialogue of playwrights such as Dryden, Behn, Wycherly or Vanbrugh, gives us the closest idea. This sort of dialogue is not comfortable for the modern reader. My approach has been to simplify rather than elaborate on normal speech. I often thought to myself, "would a 17th century person understand what she's saying?" If the answer was no, then I'd simplify again.

You have a MA in Creative Writing. How did the program shape your writing? What was the single most important lesson you learned?

It shaped my writing because I suddenly had a lot of very critical (in a nice way) readers! One of the things I learned was that although dramatic situations seem attractive to a writer, the story has to be about the people. I know this seems obvious, but for historical fiction writers especially, it is easy to get caught up in the history and lose sight of who the story is about. And it should always be a who, not a what!

Like The Lady's Slipper, The Gilded Lily will also be published in the United States. What’s it like to have your book published in another country?

Absolutely fascinating. Being published in the US is like being published in a lot of different countries! All the states are so particular, the landscapes and concerns of the readers unique to that place. The feedback from the US has been so interesting, as there are so many different views of England. Each person will be imagining their view of Westmorland based on what they know and my description. After all, the reader constructs half the story.

Your next novel, A Divided Inheritance, is set in England and in Spain during 1609. How is this writing experience different than the other two books?

First of all, researching Spanish history is a challenge when you don't speak Spanish. Fortunately I have a friend who does! I took a research visit to Seville which was invaluable. The period is earlier than my other books, and the whole atmosphere under King James of England and Philip II of Spain is less lax and more severe than under Charles II. The book turned out to be "bigger" than the other two - both in length and in scope. This is partly to do with setting it in two countries and partly because the ideas in it needed more characters. I guess you could say I'm getting more ambitious!

I understand that you enjoy meeting with book discussion groups. How can readers contact you?

I love to discuss my books with readers and book groups. Book group questions are up on my website www.deborahswift.co.uk and I can be contacted at authordeborahswift@gmail.com

Thank you, Deborah, for taking the time to answer my questions. The Gilded Lily and The Lady’s Slipper are available at your local bookshops.
Posted by Ann Weisgarber at 02:02

Great interview! Thanks Ann and Dee.

Thanks Eliza and Frances.

Dee, I like your take on publication in the States. It's fascinating that readers in various parts of the country see England in different ways. Any way you cut it, though, Americans love your work!

Content:
Welcome to Make Money Online with best investment in Hedge fund day trading with high returns on Daily Interest the world best revenue sharing program in which High Yield Investment Program, Best Hyip, Best Investment, Hyip Monitor, Forex Fund, Daily Profit, Monthly Interest, Monthly Profit, Earn Money Online, Money Maker Group, Dream Team Money and like this much more and you can withdraw the amount throw referral commission, eCurrency Invest, LibertyReserve, Alert Pay and SolidTrustPay as well. Get 200% profit within 150 days and the minimum withdraw is only $5 which is on daily basis.
For More Details click the link below: